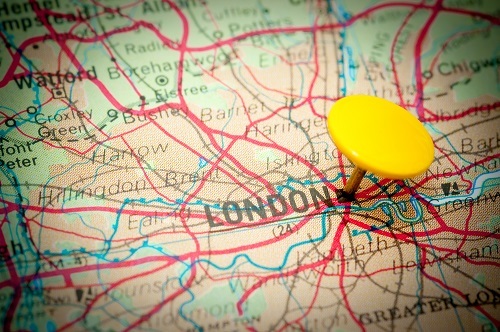 map marked with the location of London in the UK

It was a property press announcement indicative of these post-Brexit times. A central London Travelodge is snapped up by a Chinese property magnate for around £42m.
The news swiftly followed confirmation that a US cinema chain, controlled by Chinese billionaire Wang Jianlin, had just bought the Odeon and UCI business from Guy Hands’ London-based private equity firm, Terra Firma for £921m – some way below the figure of £1.2 billion figure that the sale had been muted to fetch.

In the wake of Britain’s decision to pull out of the EU and with the pound plunging to around $1.30 and looking susceptible against other major currencies, both transactions are evidence that, suddenly, UK commercial property assets appear a whole lot cheaper and more attractive to foreign buyers. And for those looking to bag a bargain, it looks as if commercial property values could fall further, with nervous sellers pulling money out of the sector.

Three big asset management firms, Standard Life, Aviva Investors and M&G Investments, have all halted trading in real estate investment funds. Each has heavy exposure to offices and other prime commercial property which can’t be unloaded quickly enough when twitchy investors want their money back.
Some analysts say the tremors in the property sector are being fuelled by huge uncertainty about the economy ahead of Britain’s divorce from Europe, and the possibility that foreign investors and companies might abandon the U.K.
In any event, it’s an about turn in sentiment for a market which had seemed unstoppable. Even in the wake of the global financial crisis, UK real estate soon stabilized. Then, ultra-low interest rates and a flood of foreign money pushed prices through the roof, particularly in London.

But times have changed – and remarkably quickly.

Bank of England Chief, Mark Carney, has recently reported that commercial real estate transactions had fallen by 50% from their peak last year.
“Brexit may very well bring an end to the trend of real estate asset appreciation in the U.K., and London in particular,” said S&P Global Ratings analyst Marie-Aude Vialle.
Much of the speculation over what happens next is focused on foreign investors, and whether they will continue to splash out on landmark buildings in central London.
There are early signs that some are getting cold feet. Singapore-based United Overseas Bank said it would stop providing loans for London property purchases because of uncertainty following the referendum.

But the bank’s decision could turn out to be an exception. Real estate agents say other potential buyers are salivating over the pound’s steep decline. In fact, in sharp contrast, Singapore-listed property developer Oxley said, since Brexit, it had received increased inquiries about the UK from potential overseas buyers.
The firm, which is currently developing a 363,000 sq m residential, commercial and retail project in east London, said it would now place greater emphasis on sales and marketing in the Middle East and Asia following the vote.

Asian investors have traditionally found the UK attractive, because of the combination of stable governance and the liquidity in the London property market. And whilst some analysts say that a falling pound will affect rental incomes repatriated to Asian countries, they believe a decline in the UK’s currency also presents a buying opportunity.
In a post-referendum statement, Nicholas Holt, head of research for Asia Pacific at Knight Frank, said: “The significant drop in the value of the pound, as in 2009, could lead to an uptick of interest by Asian investors, who, over the past few months have adopted a wait-and-see approach to the referendum — and will now see their buying power increase.”
Meanwhile, Juwai, China’s biggest international property portal, said the number of Chinese buyer enquiries for UK property in the month since Britain voted to leave the European Union was 40pc higher than average.

Bernie Morris, head of Juwai’s EMEA division, said: “The data shows that the Brexit vote has definitely boosted Chinese buyer interest in UK property. The chief mechanism has been the reduction in the value of Sterling against the dollar and the yuan. Now, with politics stabilizing and a competent new government in place, the UK looks like the same old safe haven as ever – but cheaper.”

Meanwhile, in their first major post-Brexit analysis on how the decision will impact the Central London Office Market, Savills say that whilst opportunistic investors are circling in response to UK funds preparing for a sales programme, risk-averse overseas investors may also be persuaded to offload their London properties.
Savills said many investors were already moving away from a capital growth driven strategy to an income-focused one – a trend that was expected to intensify.

Discussions prior to the referendum indicated that there was a significant volume of opportunistic capital targeted at London from the US, Middle East, and Asia Pacific. Investors had stated that they would be attracted to the income return of London offices, if yields were to rise 50bps.
“We do not believe that there will be a rush of selling outside the funds, primarily because of the very low levels of debt that have been prevalent in the market since the GFC,” said Mat Oakley, Director of Commercial at Savills. “However, we do believe that some risk-averse non-domestic investors may come under pressure in their domestic markets to sell out of London.”
Investor confusion would start to settle, once financial market turbulence and noise around the retail fund closures had quietened, and once the Bank of England’s MPC had provided several months of guidance on the thinking around the UK interest base rate, the Report said.

Savills’s end of 2015 forecast had already suggested a steady decline in investment volumes over the 2016-2020 period, with returns from London office property reducing. The referendum result had reinforced this, the Report commented, adding that “central London office investment volumes will undoubtedly be lower than expected in 2016 and 2017.”
Three weighty recent surveys have also highlighted the challenges facing the commercial property sector in the aftermath of Brexit. The Q2 2016 RICS Commercial Property Monitor found a significant decline in investment sentiment in UK commercial property, particularly in the City of London, with 54 per cent of respondents indicating the sector is in the early phase of a more prolonged downturn.

RICS said political and economic uncertainty in the aftermath of the referendum result had dampened sentiment in the commercial property market, especially in the capital. “Although the impact is widespread, the drop in confidence has been most pronounced in London,” said RICS senior economist Jeff Matsu said.
In London, RICS said office and retail rents were expected to fall around 3% over the next 12 months, with secondary retail rents expected to suffer the largest decline. But RICS also said a tight property supply, especially in the industrial sector, should provide a certain degree of support to rents and capital values in the short-term.

Separately, new research by property consultancy Lambert Smith Hampton, predicted UK commercial property prices will fall by a double digit percentage over the next six months.
Meanwhile, a statement from Land Securities predicted demand from occupiers would be subdued until confidence returns – which could impact rental values. They said foreign investor demand had declined at a faster rate at 27%, with London feeling the steepest decline, and investor enquiries falling to their lowest since 2009.
For overseas investors, then, it’s a case of weighing up the pros and cons. Yes, sterling’s a lot cheaper than it’s been for decades and it would appear that there’s going to be weakness in London’s commercial property for some time.

The question is – how many foreign purchasers are prepared to buy into that scenario?
It’ll certainly be interesting to see how many more hotels, cinemas and the like fall into the hands of voracious non-UK investment parties in the coming weeks and months.

Crystal ball time for many currently eyeing up the state of play in the London commercial property market, you could say.